HomeElection2023: Battle For PDP Presidential Ticket Hots Up As Nomination Closes On...

2023: Battle For PDP Presidential Ticket Hots Up As Nomination Closes On 21st April 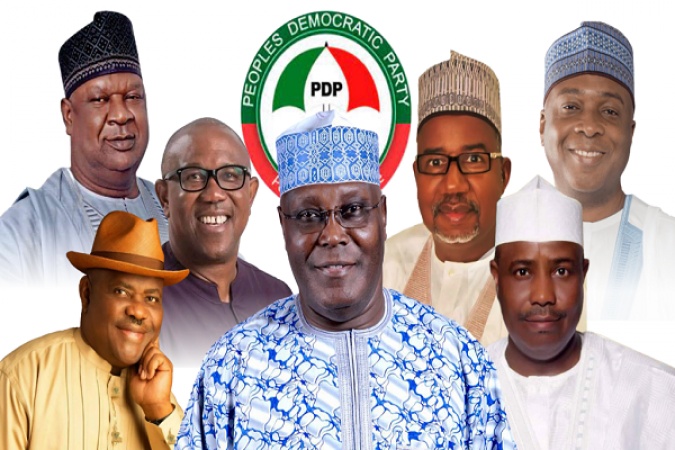 The scramble for delegates by presidential aspirants has intensified as the submission of nomination forms ends today in the Peoples Democratic Party (PDP).

The aspirants visited many state chapters of the party yesterday to woo key leaders and delegates ahead of the proposed primary.

Eight aspirants have so far submitted their documents to the national secretariat of the opposition party in Abuja.

However, more are expected to comply with the directive on today’s deadline.

Others are Muhammed Hayatu-Deen, publisher Dele Momodu and Nwachukwu Anakwenze.

However, there is no consensus among the aspirants on the proposal for a consensus candidate initiated by Tambuwal, former Senate President Bukola Saraki, Bala Mohammed and Hayatu-Deen.

Wike yesterday pleaded with party delegates to pick him to avoid defeat in next year’s election.

He urged members of the National Working Committee (NWC) to back him.

There was a flurry of activities regarding the presidential primary yesterday.

Sokoto State Governor Aminu Tambuwal submitted his presidential nomination form at the party secretariat, promising to lift the country if given the ticket and elected as president.

Ex-Anambra Governor Peter Obi met with the state delegates and promised to fix Nigeria if given the chance to lead.

He was also of the opinion that the party would fail if it kept the presidential ticket in the North.

Wike, the Rivers State governor, who met with the NWC members led by party chair Iyorchia Ayu, said: “Field me or lose the presidential election. I request you all to campaign for me to get the PDP presidential ticket.

“Mr Chairman, since I know that members of the NWC are also delegates, I come to present myself to you and also woo you because you are entitled to vote.

“I am wooing you to vote for me because I have the capacity to make PDP win the election in 2023.

“To show you how serious I am, I did not come here to negotiate for vice president. I came here to win this election and I will win this primary on May 28/29.

“PDP requires people like us to face the APC. Everybody in this country knows me because of my views on national issues.

“Nobody can say I don’t know whether Wike will do this or do that. When I see issues, I say my view and I am not going to run away from it.”

The governor dismissed the call by some aspirants for a consensus presidential candidate, saying that it smacked of conspiracy.

Wike said he had consulted widely in his quest for the ticket, stressing that 2023 was the last chance the PDP has to bounce back to power.

“The only way God can forbid is to give the man who has the capacity to win the election the ticket. I sat down, looked at myself and checked the records. What does PDP want?

“If you allow me to fly the flag of the party, which I know by the grace of God, I will be the candidate, and I become President, one of the things I will do is to address the disconnect between the party and the government.

“You all know the role I played to get all of you elected at our last convention because I ensured that none of you campaigned to get to the positions you occupy today.

“This is the time for you to pay me back for what I did for you. In essence, whether I get the ticket or not, I have no other place to run to other than the PDP because it is not that if I don’t get the ticket, then, I will move to another party. No! You fight in the house, you settle yourselves.”

But Ayu, who acknowledged Wike’s request for the support of the national leadership, said party leaders had resolved to provide a level-playing ground for all aspirants.

“I want to thank you for the services you have rendered to the PDP, which we hope you will continue to render to the party.

“In becoming President, you have to choose one; you cannot have the two.

“But let me assure you that this NWC will try to uphold the tradition of the PDP.

“That tradition since 1999 is running very credible, transparent conventions, starting from Jos to the last one that produced this NWC.

“I want to assure you that there will be no foul play, no manipulation. We will certainly do better than what you did in October last year.

“We will hold an absolutely transparent convention. At that stage, we will try to be the INEC of the PDP; not be partisan.

“We will try as much as possible to make sure that every member of the NWC works for the party.

“But I want to also assure you that once you emerge as the candidate of the party, whoever emerges from that point on, we will be aggressively partisan because you want the party to win the election.

“We will do everything in our power by way of canvassing for votes from the Nigerian people to ensure that the PDP wins the next election because a victory for a PDP candidate is a victory for everybody.

“I particularly like your submission when you made it clear that win or lose, you will never leave the party. You will work for the party. You have done it before and we are very sure that you will do it again.”

There are 17 aspirants vying for the party’s presidential ticket.