HomeElection2023: I WILL BACK CANDIDATES SELECTED BY DIRI, STAKEHOLDERS - DICKSON

2023: I WILL BACK CANDIDATES SELECTED BY DIRI, STAKEHOLDERS – DICKSON 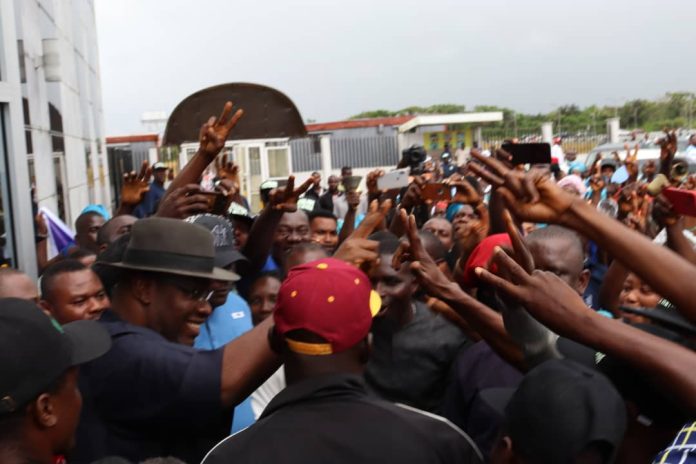 A Massive crowd on Wednesday defied heavy rainfall to receive the Senator representing Bayelsa West in the National Assembly, Senator Henry Seriake Dickson, as he arrived the Bayelsa Airport built under his administration on his way to the People’s Democratic Party Senatorial screening.

The Senator who spoke to journalists at the Airport said that he would work for the success of all candidates selected through the process by the Governor, Senator Douye Diri, who is the leader of the party and the critical stakeholders.

He thanked the large number of party supporters for their continued support for the Governor and the PDP administration in the state.

“I want to thank you all and I urge you to continue to support our party and our government, ” he said.

“I believe that I will join the Governor, who is the leader of our party, to campaign for all the candidates that the he and critical stakeholders will select in accordance with the constitution and guidelines of our party.”

The former Governor said that he was visiting the state to present himself for the screening of his political party in accordance with the stipulations of the law and the party’s guidelines, with the commencement of the political process.

He thanked the huge crowd for coming out in the heavy rain to show sustenance of their solidarity, support and prayers.

“As you know today, I am in the state for a purpose. The political process has started. I am here to submit myself in accordance with the constitution and guidelines of our Party, the PDP.

“We thank God, our state is peaceful. I want to thank all our people; men, boys, chiefs, elders, women, people of all descriptions, of all ages who found time, even in spite of the weather that is not too clement, to be here, to wait here to receive me in this heartwarming manner.

“I lack the words to appreciate our people for their abiding solidarity and support, as well as their prayers. This is recurring and I think it is indeed humbling.

“I am also grateful to several others who are not able to come due to one reason or the other and those who on their own came here to see me, I think it is very heart warming.” he added.

Dickson who has spent a year and five months in the Red Chambers is re-presenting himself to the party in pursuit of his bid to return to the National Assembly.

A group of top politicians from Ekeremor and Sagbama Local Government Areas, making up the Bayelsa West Senatorial District, had bought the expression of interest and nomination forms for the Senator and presented it to him in Abuja on March 30.

The Senatorial District’s political leaders had urged him to return to the Senate having handled in a most convincing manner, issues involving the interest of the district, the Ijaw Nation and the Niger Delta, in so short a time.