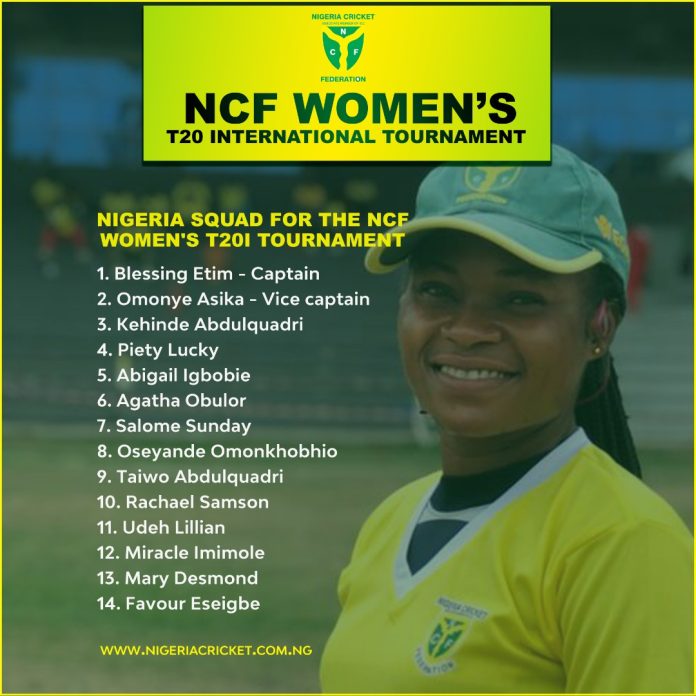 The Nigeria Cricket Federation (NCF) has announced a team of 14 female cricketers that will represent Nigeria in a T20I International Invitational Tournament taking place at the TBS Cricket Oval, in Lagos.

This information was made known yesterday, March 23rd  2022 by the NCF Public Relations Officer, Mr. Musa Ehizoje Bodie in Abuja through a press statement.

Find full text of the press statement below:

The Nigeria Cricket Federation is pleased to announce the final list of 14 players that will be flying the Country’s colours in the Women’s T20I Invitational Tournament scheduled to take place from the 26th of March to 4th of April 2022 at the Tafawa Balewa Square Cricket Oval in Lagos, Nigeria.

Nigeria began their journey to this tournament over 4 weeks ago where 36 women were invited to camp in Benin City.  The players were pruned down to 24 and then reduced to 18 for the last phase of closed camping.  In a statement made official by the General Manager of the Federation Mr. Emeka Igwilo, The final 14 players were announced after a series of trainings and trial matches, to ensure that the best was selected to execute this tournament.

The team selected is a blend of youth and experience with Blessing Etim, Nigeria’s longest serving player leading the team as Captain, supported by Omonye Asika as Vice Captain. Other familiar names include Salome Sunday, Agatha Obulor, Mary Desmond, Kehinde and Taiwo Adulquadri, Lucky Piety, to mention a few.

Udeh Lillian, a revelation from the National Under-17 championship breaks into the senior women’s team at her first attempt after her exploits during the age grade tournament earlier this year in Abuja.

Nigeria will open her fixture against West African rivals Sierra Leone on Monday 28th March by 9:30am, while the afternoon fixture will feature Ghana vs Rwanda.

May 18, 2022
Previous article3 killed, 7 injured As Soldier Opens Fire In Borno
Next articleAPC WORRIES OVER INCLUSION OF POLITICAL APPOINTEES INTO CONVENTION LIST