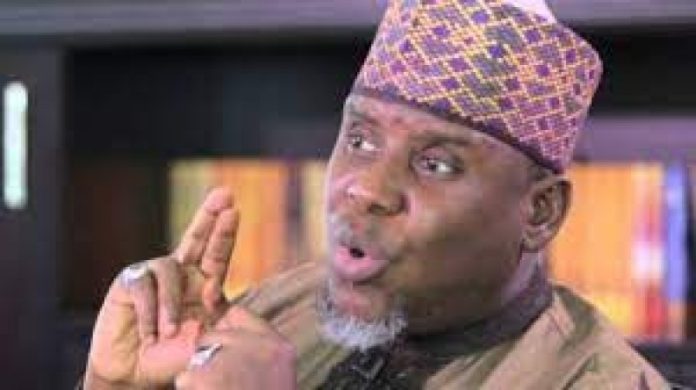 The umbrella body of Muslims in Nigeria, Jama’atu Nasril Islam (JNI), has said that there are questions regarding insecurity in the country for which the Federal Government must provide answers to enable citizens to know if the government is committed to finding last solutions to the rise in criminal violence across the country.

A statement by JNI Secretary-General, Dr Khalid Abubakar Aliyu, on Monday, noted that terrorists are now becoming bolder and more belligerent by the day without fear of being confronted or apprehended by authorities.

Jama’atu Nasril Islam (JNI), has said that there are questions regarding insecurity in the country for which the Federal Government must provide answers to enable citizens to know if the government is committed to finding last solutions to the rise in criminal violence across the country.

A statement by JNI Secretary-General, Dr Khalid Abubakar Aliyu, on Monday, noted that terrorists are now becoming bolder and more belligerent by the day without fear of being confronted or apprehended by authorities.

The statement posed questions such as: ‘with all the reported resources allocated to relevant security agencies; intelligent gathering mechanism, military arsenal and tact, can’t the Government provide any convincing justification on why the security situation in the country continues to deteriorate? Why are attacks experienced all over the place and continuing unabated without any deterrence? Moreover, why must the security budget and expenditure remain so secretive, despite the reported release of funds?

“The mind-boggling train attack of Monday, March 28, 2022, the kidnap and sporadic shootings that ensued thereafter the train en-route Kaduna needs to be seriously investigated and punitive measures are taken.

“Although, without doubt, the security men have exhibited capacity, resilience, determination and dexterity during the rescue operation of the same ill-fated train attack.

“It is also the firm belief of most Nigerians that the Government is expected to know the enclaves and hideouts of these criminals, particularly that only Government has absolute control and use of force, and by extension, it also has the machinery to generate genuine information.

“Again, why can’t the Government proactively take the battle to the criminals’ hideouts and wipe them off? Why should the Government wait until people are attacked, lives and property lost for them to strike and be issuing empty orders and usual condemnation? The whys are endless?

“It is high time the security outfits are directed to ransack the enclaves of all criminal elements and deal with them decisively. Informants should not be spared, as they are more dangerous than the killers.

“They should be made to face the right punishment befitting their crime. The intelligence community should beef up their efforts in trying to dig to the root of this phenomenon.

“It is also worth noting, that in recent times, scholars of social behaviour have discovered that most acts of terrorism and banditry are carried out under the influence of hard drugs. As part of efforts to tackle insecurity in Nigeria, the war on drugs should be placed on the front burner as it is the elixir that spurs criminals to action. Suppliers, vendors and traffickers of hard drugs and intoxicants must be dealt with decisively.

‘To say the least Jama’atu Nasril Islam (JNI) is agonized and short of words to express herself over the gory incident of the infamous train attack which happened on Monday, 28th March 2022.

‘The well-orchestrated incident remains highly condemnable, reprehensible and upsetting to every rational mind. It appears that the continuous callous acts of mayhem, killings and arson happening almost on daily or weekly bases around us; either within communities and/or on the roads we ply, have automatically reset our human psyche that we now have accepted such dastardly acts as part of our lives, to the extent that we no longer feel it.

The humanity in us is slowly being eroded thereby making us adapt to the new normal within which we, unfortunately, found ourselves.

“It should be noted that in Islam and by all global standards, the essence of Government and Governance is solely to protect the five principal cardinal rights of the human race, the most important of which is LIFE! Any government that is incapable of protecting the lives of its citizens has lost the moral justification for being there in the first place; this is enunciated in section 33(1) of the Constitution of the Federal Republic of Nigeria.

“We have however carefully studied and followed up the unfortunate train blast, especially that another train attack was reported to have occurred on the Lagos-Kano bound train, near Jaji, Kaduna state, on Thursday, 31st March 2022, which inevitably led to the death of the locomotive operator.

“Nevertheless, history is replete with several astonishing and brave art of governance exhibited over time by leaders. For instance, during the time of Prophet Muhammad (Peace be upon him), he battled and expelled Banu Qaynuqa from the city of Madinah, because a woman was molested in the market by one of them and the community supported his actions.

“The Prophet (SAW) did not waste time but promptly attacked Banu Qaynuqa and expelled them. This served as deterrence to others with evil intentions.

“What action did the authorities take in averting and/or remedying such absurd and ungodly happenstance? Why must the country be brought to kneel? Human life is held sacrosanct in Islam that is why Allah (SWT) declared in the Glorious Quran that if a single soul is killed without just cause, then it is as if the entire humanity is wiped off the face of the earth. We claim to be people of faith and all these occurrences are allowed without any form of prompt intervention. Why?

“Well, it should be known that an attack on one soul; is an attack on all, and this is how the human race should be preserved and protected, but if allowed to continue we fear the consequence(s) of the innocent souls that were killed, without any fault of theirs.

“Terrorists are now becoming bolder and more belligerent by the day. They operate in any area of their choice(s) at any time they so wish. They even operate for up to 8 hours non-stop (as it was reported to have happened in Niger State last Monday), without any fear of being confronted or apprehended.

“Most communities are now under the bandits’ absolute control with taxes being paid to bandits–some parts of Borno, Katsina, Zamfara, Niger, Sokoto states and some others yet to be disclosed to the public. In fact, terrorists do what they wish knowing that there is no gun powder or authority that will defy them.

“The National Drug Law Enforcement Agency(NDLEA) and other security agencies should as a matter of national security note and penetrate into villages, higher institution campuses, motor parks and recreational or viewing centres, because they are now dwellings where hard drugs/substances are being peddled brazenly.

“Likewise, parents, religious and community leaders have a role to play in the fight against illicit drugs/substances pervading most households within our neighbourhoods. This should be considered a fight for all and not only for the government.

“Those vested with the responsibility of protecting lives should fear Allah, The Most High and do what is expected of them. Security issues must not be politicized. They should be proactive and firm on all matters relating to security.

“If the terrorists have the effrontery to attack at any time without fear, why should the Government shy away from pursuing and destroying them? We nevertheless reiterate our several calls to the government that there is strong nexus between the Boko Haram insurgency and the ongoing banditry in some parts of the country.

“We stated this in our December 14th 2020, 18th February 2021 and earlier sometimes in 2018 as a result of the repeated perilous insecurity challenges bedevilling the Nigerian nation, hence, the need to urgently revamp the nation’s security architecture and effectively look inward for an appropriate way(s) to averting and/or mitigating the recurring misnomer in Nigeria.

“We call on all well-meaning Nigerians not to be deterred, but rather should be more optimistic, as with every hardship comes a relief (Qur’anic verse). We should therefore continue to pray fervently for the restoration of peace, security, prosperity and development, especially in this blessed month of Ramadan.

“We pray Allah, the forgiver of sins and the healer of the ill; will forgive the shortcomings of those who have lost their lives in the ill-fated train attack, give their families and associate the fortitude to bear the loss. May the injured recover comprehensively and the traumatized strong to continue with their respective lives.

Previous articleEU, Bayelsa To Partner On Gulf Of Guinea Security
Next articleBREAKING: 10 Soldiers Killed As Bandits Attack Military Base In Kaduna

July 8, 2022
Previous articleEU, Bayelsa To Partner On Gulf Of Guinea Security
Next articleBREAKING: 10 Soldiers Killed As Bandits Attack Military Base In Kaduna