This was in fulfillment of the promise the two local governments constituting the senatorial district made last week to ensure the return of Senator Dickson because of his sterling performance as a Senator in just two years.

The top political leaders from the Senatorial District took turns to speak on the need for Senator Dickson to continue with his vibrant representation at the upper chamber.

The Deputy Speaker of the State House of Assembly, Mr. Michael Ogbere, said after buying the form that Senator Dickson did exceptionally well as Governor for two years and did a lot of life touching projects in the area.

He said that the Ekeremor people are impressed by his overwhelming performance and unparalleled energy on issues of concern in the district, Bayelsa, the Ijaw Nation and even the Niger Delta. 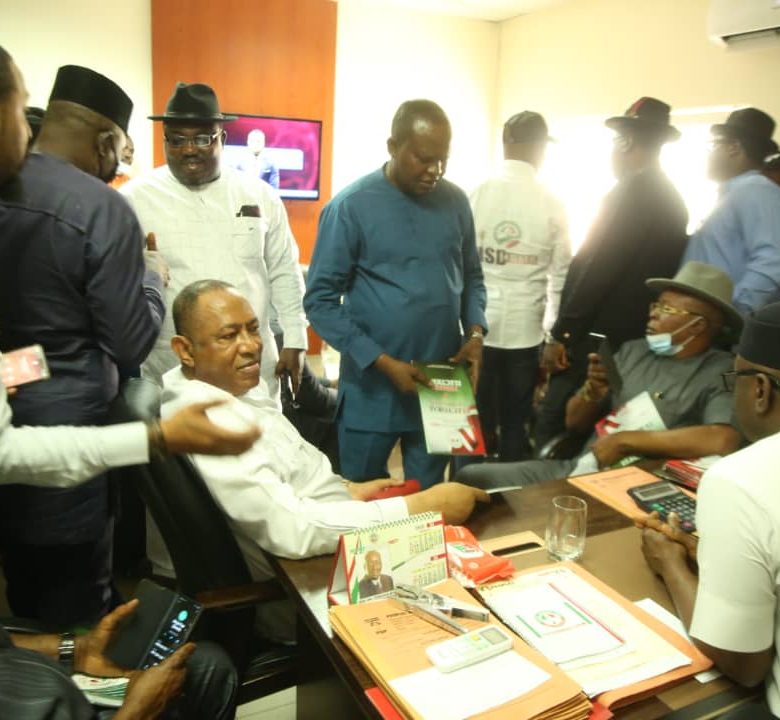 He called on the Senator to contest the 2023 election on the strength of his impressive credentials which has made Bayelsa West, the surest senatorial seat for the People’s Democratic Party in the state

He dismissed the issue of purported zoning of the National Assembly positions in the area as shown by the fact that previous Senators from Ekeremor recontested for the third time and a former Deputy Governor from the area, Peremobowei Ebebi, contested and pursued the case on the electoral dispute to the Supreme Court where he lost.

Also a former Speaker of the old Rivers State House of Assembly, Rt. Hon Tuesday Kemeagbegh who chronicled the exploits of Senator Dickson, including the Sagbama Ekeremor Road and many others noted that it would be unfair and a monumental disservice for Bayelsa West to tell him to leave after doing just two years in the National Assembly.

He challenged those who are opposed to Senator Dickson to contest by campaigning with their contributions to the development of the people of the District.

He stressed that the Ijaw people are in dire need of efficient, skilled and credible brand of vibrant representation which Senator Dickson provides effortlessly.

He said to lose that advantage cannot be an option.

Speaking also, a former Permanent Secretary, Head of Service who is the Chairman of the Bayelsa Civil Service Commission, Peter Singabele, said that Dickson has impacted so much in diverse ways too numerous to mention on the lives of the people of the area and must continue with his brand of productive leadership at the Senate.

Senator Dickson who received and accepted the senatorial nomination form from the PDP leaders thanked them for what he described as their humbling support, encouragement and unflinching commitment to the promotion of the interest of the District.

He said that Bayelsa West, Bayelsa State, the Ijaw Nation and the Niger Delta were in dire need of skilled, experienced and effective representation as the nation moves towards a critical period of transition.

He stressed that the country was at a difficult period with a lot of problems and expectations which makes it mandatory for people of experience to be at the Centre to provide the needed support to the state government and the requisite guidance back home.

“This is going to be a very trying period, a transition unlike any other before now. And at this very difficult period, when our country is pregnant; pregnant with problems, pregnant with expectations, I agree that we need steady hands at the Centre to continue to guide and to support and to make the case that we have to make for our people.

“For some time, a number of you have been discussing with me on the need for continued experience and deployment of our national image and network at this particular time in the service of our people. And you have all given your various reasons as to why we should be in the ballot one more time again.

“And today after examining the various reasons and the need for steady experienced hands at the National Assembly and in the Senate in particular for Bayelsa West, for Bayelsa State and for the Ijaw nation, working with other friends and allies in the service of our people in Niger Delta and Nigeria, and after listening to all the arguments and the cases that have been made, I am humbled to accept this to run, to continue to provide support.

“I do so appreciating the need to be there to guide and to support the government of our people back home. The need to be a rallying point, the need to mobilize and galvanize support for our party, the need to be involved as this country moves towards a very momentum election and transition.

“This is going to be a very trying period, a transition unlike any other before now. And at this very difficult period, when our country is pregnant, pregnant with problems, pregnant with expectations, I agree that we need steady hands at the Centre to continue to guide and to support and to make the case for what we have to do for our people.

Senator Dickson said that Bayelsa West is the safest senatorial seat in the entire country as the PDP leaders are in firm control of the grassroots.

He urged the stakeholders and leaders to widen the scope of consultations to include the few who have not queued behind his candidacy.

Dickson who called for tolerance, stressed that while disagreement in politics is normal, his brand of politics is totally devoid of violence, a culture which his teeming followers should embrace at all times.